Where Do Polyvinyl Chloride PVC Sheets Come From?

Where Do Polyvinyl Chloride PVC Sheets Come From?

Whether it is plastic wall cladding or plastic gutters, its is highly likely It will have been formed using Polyvinyl Chloride, also known as PVC. PVC is essentially a vinyl polymer derived from ethenyls with one hydrogen removed and replaced by a chloride group. PVC sheets are used in many guises, especially in the building trade mainly because of its durability and low cost. It has replaced many materials were corrosion has occurred and were metal needed to be replaced after a number of years. Saniclad supply PVC Sheets and PVC cladding to trade and to the public. Contact one of our friendly experts for a no obligation quotation.

PVC sheets are something we see and even touch every day, but you ever wondered where PVC sheets came from?

PVC was first discovered by a chemist from Germany named Eugen Baumann in 1872. PVC wasn’t however patented until 1914. Inventor, Friedrich Heinrich August Klatte started the polymerisation of vinyl chloride with sunlight. Klatte was the first person to granted a patent for PVC.

Waldo Lonsbury Semon was a researcher in the United States, and in 1926, Semon was the inventor of plasticized PVC or otherwise known as vinyl. He was attempting to dehydrohalogenate PVC in a high boiling solvent in order to obtain an unsaturated polymer that may bond rubber to metal or for any other purpose. He started experimenting with some of the discarded material by combining it with other chemicals and exposing it to temperature. This produced plasticized polyvinyl chloride – which we now commonly refer to as PVC and vinyl – a flexible gel-like substance that was very similar to natural rubber.

Throughout the late 1920s, Semon continued to experiment with this new found material, but BFGoodrich had a difficult time marketing it.

Semon received United States patents for the man-made Synthetic Rubber-like Composition and Method of producing it.

In the 1930s, Vinyl (PVC or polyvinyl chloride) remained a laboratory unknown until its first commercial use in shock absorber seals. This opened the eyes of industry to other potential applications that might reduce the need for the resource-limited natural rubber. Flexible vinyl was used to develop the first synthetic tires, which we still use to this day, albeit an improved more durable solution.

In the 1940s, PVC played a vital role for the armed services during World War Two, addressing severe shortfalls of natural rubber supplies. As a result of its enhanced safety and performance as a nonflammable electrical wire coating, vinyl has remained the standard material for wire insulation.

In the 1950s, PVC capabilities continued to diversify, as new formulations further improved the material’s physical properties and opened new markets for use. Now the largest market for PVC production is for PVC pipes due to its low cost, non-corrosive properties and is more easily installed alternative to metal piping.We are the U.K’s leading Hygienic Wall Cladding installers. 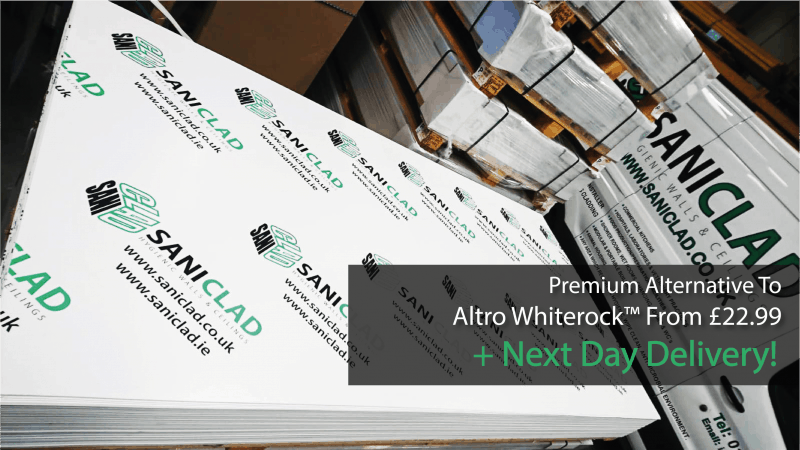 We provide Fast and Safe Nationwide delivery throughout the UK, Order before 1pm and get your order delivered the very next day.

We offer a complete one stop shop solution from project design and specification to supply and fit services. Our PVC sheets are manufactured here in the U.K and adhere to BSI and ISO9001 standards.

We will beat any genuine like for like written quote. We will not be beaten on price – Guaranteed!

Our products carry the industries only 15 year product guarantee. For installation and fittings we also offer a full 2 years labour guarantee.